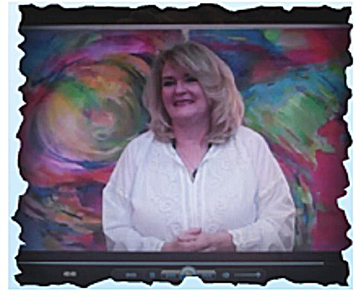 Madalyn's artwork is energetic, healing and high vibrational.  She is a natural channel of high energies and it shows in many of her art pieces.  You will find portals, angels, elementals, faces,  light beings from all different realms, and much more when you start to look into one of her pieces.   Once you find something and you look away, you will notice when you look back that the particular image you saw before has not changed into something different.  There is so much fun and excitement just discovering all the different energies that show themselves in her paintings.

Her travels through out the US, Egypt, UK, Europe and the Middle East has inspired and peaked an interest in presenting many new challenges that she looks forward to capturing as her impression of beauty as art.
Madalyn has won numerous awards in international, national and area shows. She has been Past President of Gregg Art Guild and a member of East Texas Fine Arts, Watercolor Art Society of Houston, Knickerbocker Artist of New York, Oil Painters of America, Southwest Watercolor Society in Dallas and Sugar Land Area Artists. Madalyn has a growing number of collectors in the United States, Mexico, Honduras, England, France, Egypt and Morocco. Her work is in the permanent collection of the University of Texas Medical Center, John Hopkins Medical Center, the Sofitel Hotels, and various Independent School Districts. It is also in the private collection of several prominent politicians, bankers and oil company magnates.

Madalyn was mentored for several years by William A. Herring, Past President of Knickerbocker Artist of New York and Past President of Pastel Society of America. She was also part of a private Atelier group mentored by Kay Polk, Past President of the Pastel Society of America and signature artist of Knickerbocker Artists of New York.  She has studied with nationally known artists as Catherine Anderson, Ann Templeton, Marge Brichler, Cecy Turner, Anton Weiss, Al Brouillette, Leo Smith, Naomi Brotherton and Sandra Dowd to name a few.
Madalyn Kennedy grew up in Houston, Texas and has always had a natural ability and interest in art. It seems to run in her family and, as a little girl, Madalyn remembers her mother allowing her the freedom to create and always encouraged her to get involved in painting and studying art. Her mother is also an artist, from a long line of talented painters and even today she and her mother enjoy painting together at every opportunity. Madalyn says “Even if we are not applying pigment to a surface, we are constantly talking, living and breathing art and I love that.”
2017 - 2018 Shows: Spirit Quest Center, Old Town Spring, Texas
2015-2016 Shows: Edgar Cayce Center (ARE) Houston, Texas